In May of 1948, Superdawg® was established at the corner of Milwaukee, Devon and Nagle in Chicago. Superdawg® continues to be family owned and operated in the same location today.

Maurie Berman, a recently returned GI from World War II, married his high school sweetheart Florence (Flaurie), in August of 1947. Maurie was attending Northwestern University, studying to be a CPA, while recent Northwestern grad Flaurie was teaching in the Chicago Public Schools. With their “school-year” schedules, the newlyweds wanted to open a business that they could operate during the summer months. Many other returning GIs were opening roadside hot dog carts and Maurie and Flaurie decided to open their own roadside hot dog stand, one that would be as unique and distinctive as they were. 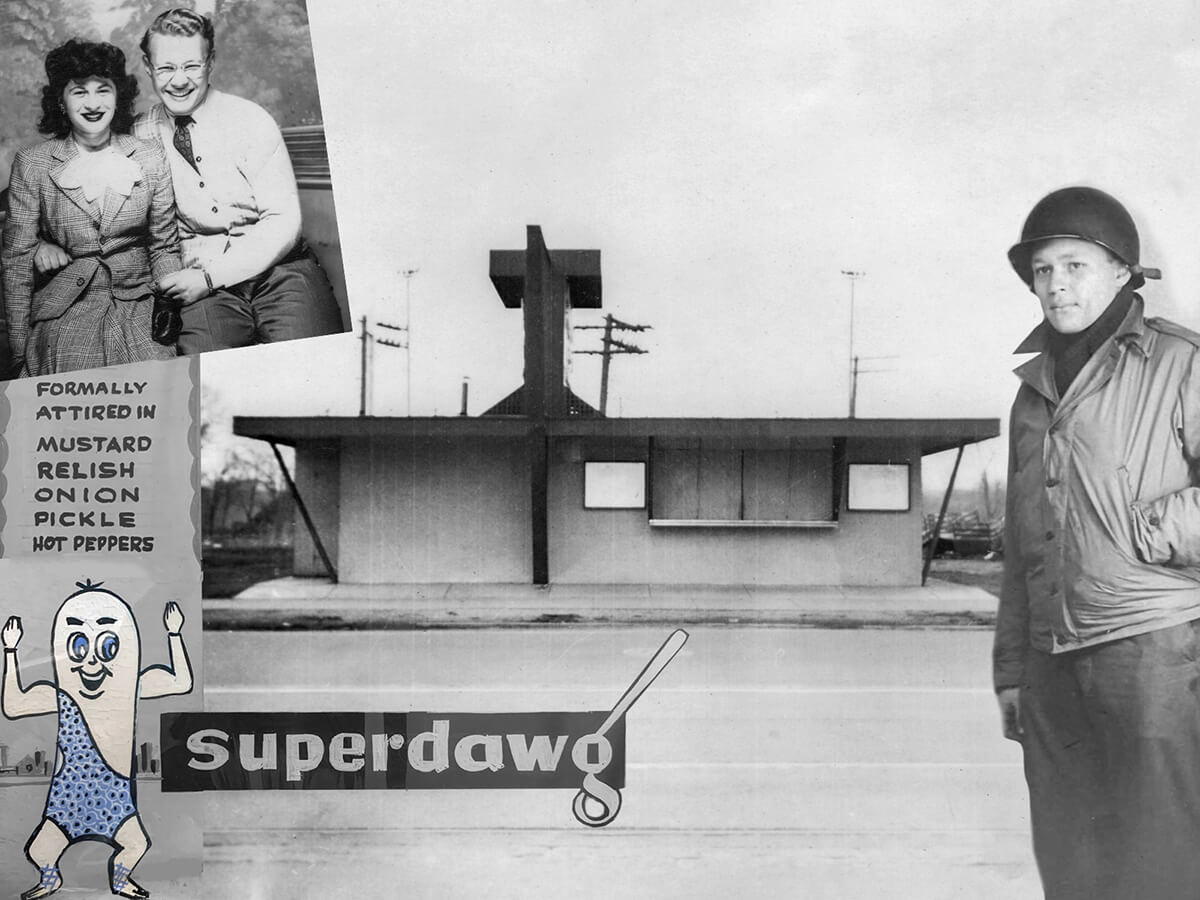 Maurie designed an architecturally distinct, 20′ x 12′ building topped with two 12 foot hot dog icons to beckon hungry passersby with their winking and blinking eyes. Maurie and Flaurie then created a proprietary, secret recipe to set themselves apart from the other hot dog stands popping up around the city. With a distinctive look and delicious recipe, they were almost ready to open. All they needed was a name. Inspired by the superheroes featured in the newly-created, popular comics of the ’40’s, Maurie and Flaurie named their signature product and restaurant. It was not a wiener — not a frankfurter — not a red hot — but their own exclusive SUPERDAWG™. 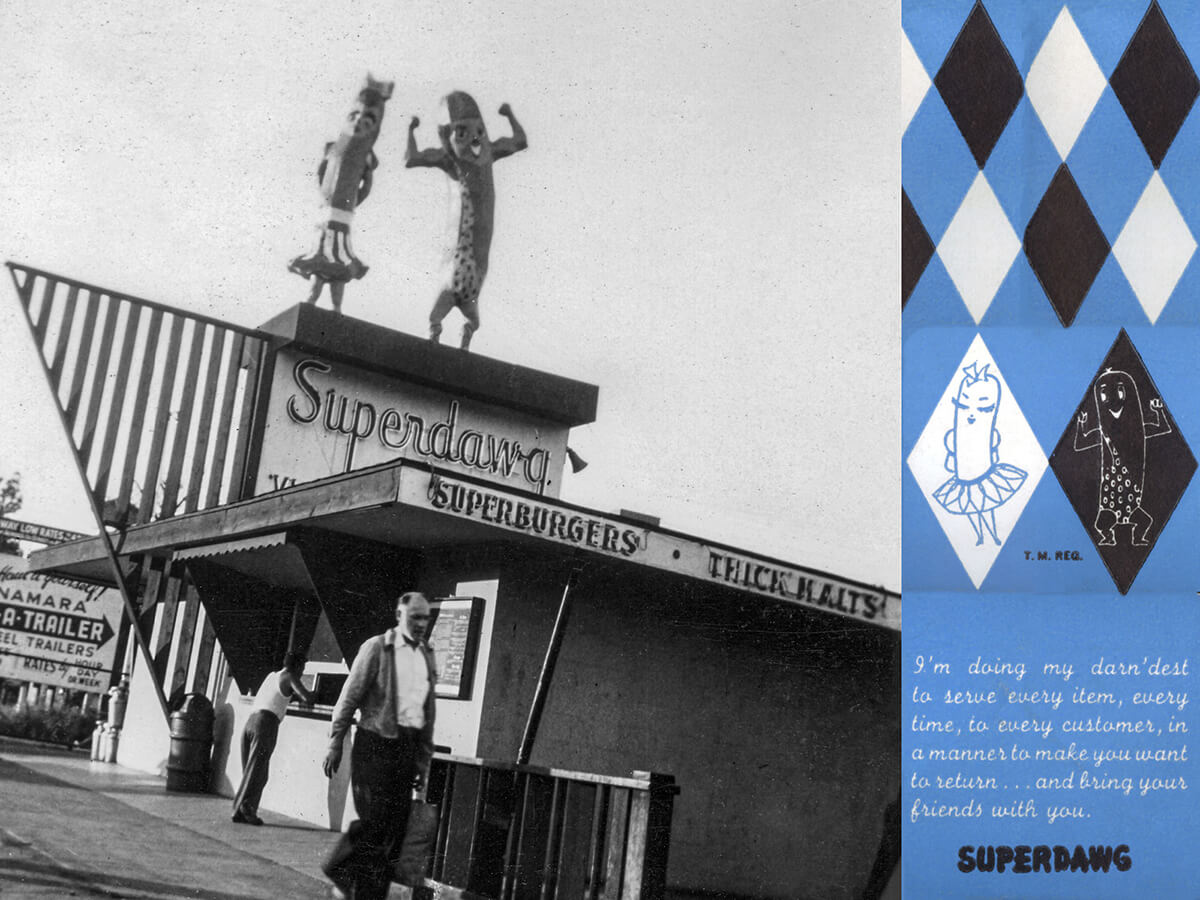 In 1948, Milwaukee and Devon was the end of the streetcar line. With the forest preserve and Whealan Pool across the street, the area was a great destination for swimming families and cruisin’ teens. Kids could ride the streetcar for a nickel, and stop at Superdawg® where a Superdawg™ sandwich and drink cost only 32 cents. Many times, on their way home, they would stop and ask what they could buy for a dime. If they were a few cents short, Maurie and Flaurie would give them what they wanted and told them to bring the money back the next time they stopped, which they never failed to do.

In 1950 Maurie passed the CPA exam, but he and Flaurie decided to keep operating Superdawg® and to open year-round in order to retain the outstanding personnel that had become so invaluable to fulfilling the Superdawg® ideals. When Superdawg® first opened, the electronic speaker system had not been invented. Carhops went out to the cars to take orders and customers signaled that they were ready for their trays to be picked up by turning on their headlights. In the early 1950’s the “carhop in a wire” electronic speaker system was installed, and Maurie designed the glowing blue “control tower” where the carhop sits to answer the switchboard and take orders. As Superdawg® grew into a successful business, Maurie and Flaurie found time to raise their family of three children (although not on Whoopercheesies® alone). 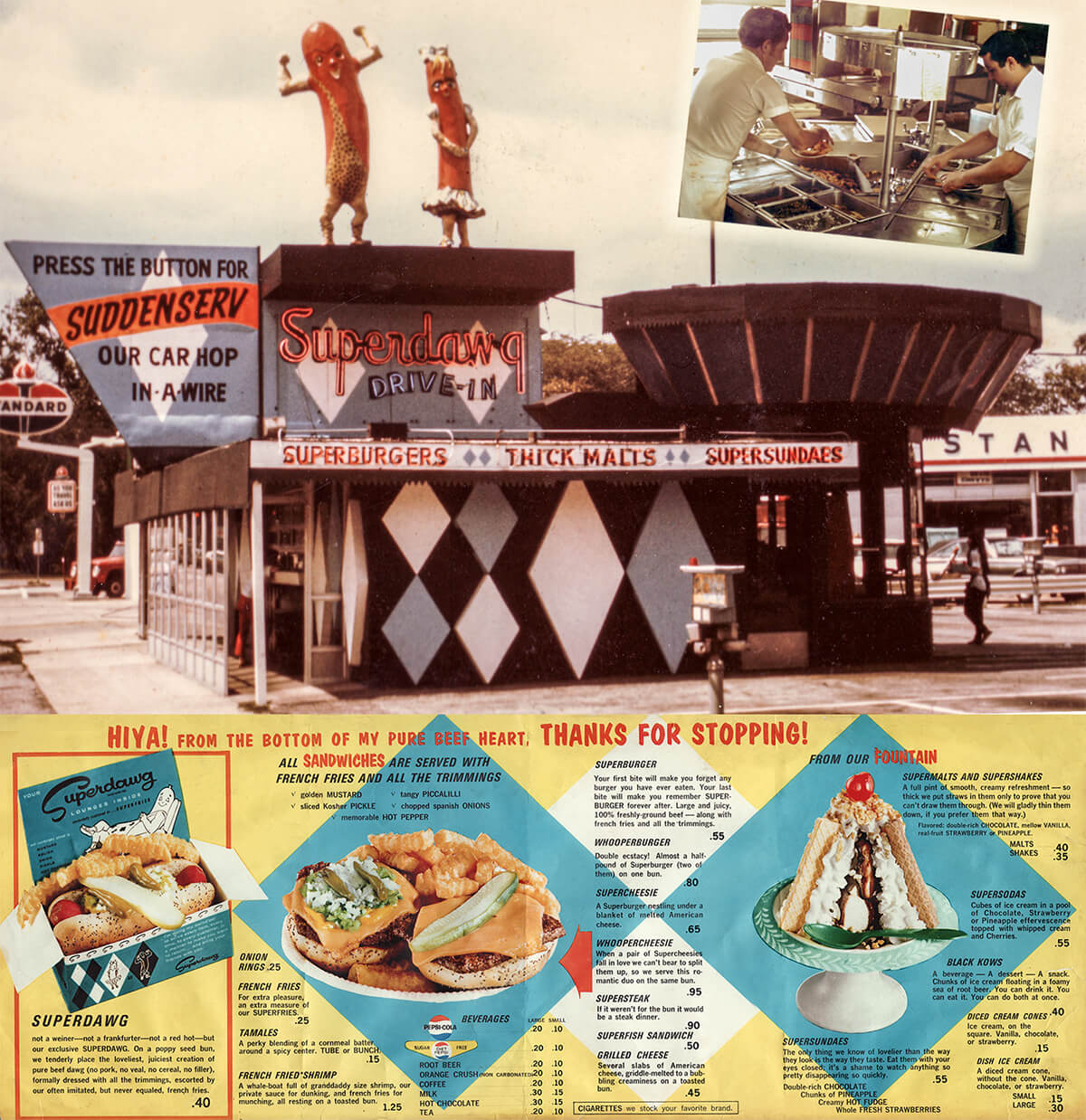 Throughout the years, small changes have been made to the menu, like the addition of the Whoopskidawg® in 1989 and the Superchic™ in 1991. However, the Superdawg™ recipe, the original trademark figures (continuing to flirtatiously wink at each other), and the drive-in concept have not changed. Customers can still order from their car and have a carhop deliver their order on a tray. Maurie and Flaurie’s attention to quality products and service, preparing each customer’s meal to order, affirming the belief that the customer is always right, and insisting that the customer should always be treated as family continues today. 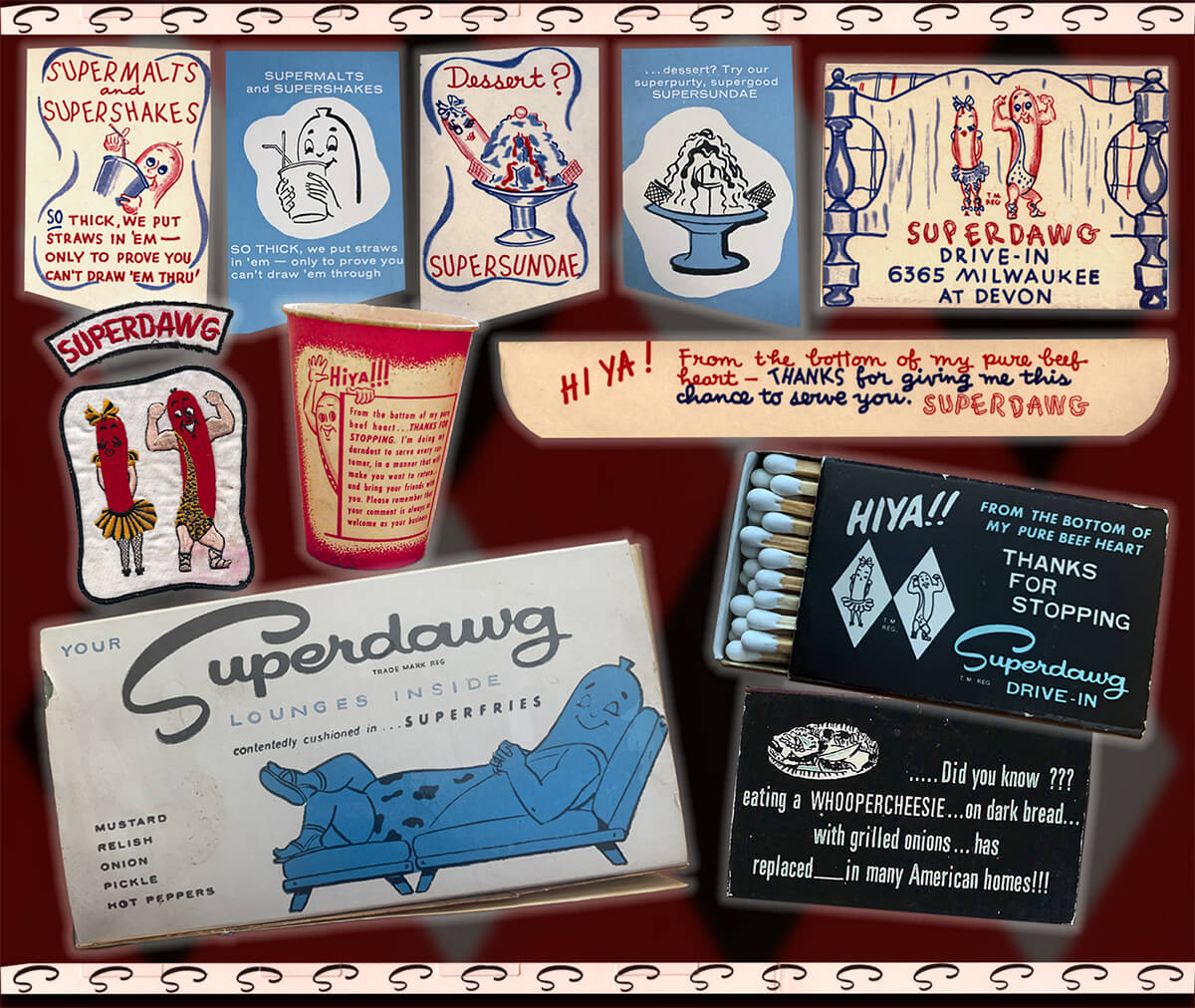 In 1999, Superdawg® underwent a makeover while retaining the original building and spirit. The classic ’40’s drive-in was updated with the addition of neon-studded canopies across the parking lot, a crisp new speaker system and a cozy, indoor dining room. The original rooftop figures were refurbished so that they can continue to serve as a Chicago landmark for years to come.

In May of 2009 ground was broken for a second location 11 miles north on Milwaukee Avenue in Wheeling, IL. Every effort was taken to recreate the look and feel of the Milwaukee and Devon location. The blue tower, the canopies on the parking lot along with the ordering speakers, the neon and diamonds along the building and canopies, the tile inside and most importantly, the trademark Maurie and Flaurie figures on the roof all were painstakingly incorporated into the plans. Much of the equipment was custom built as well. 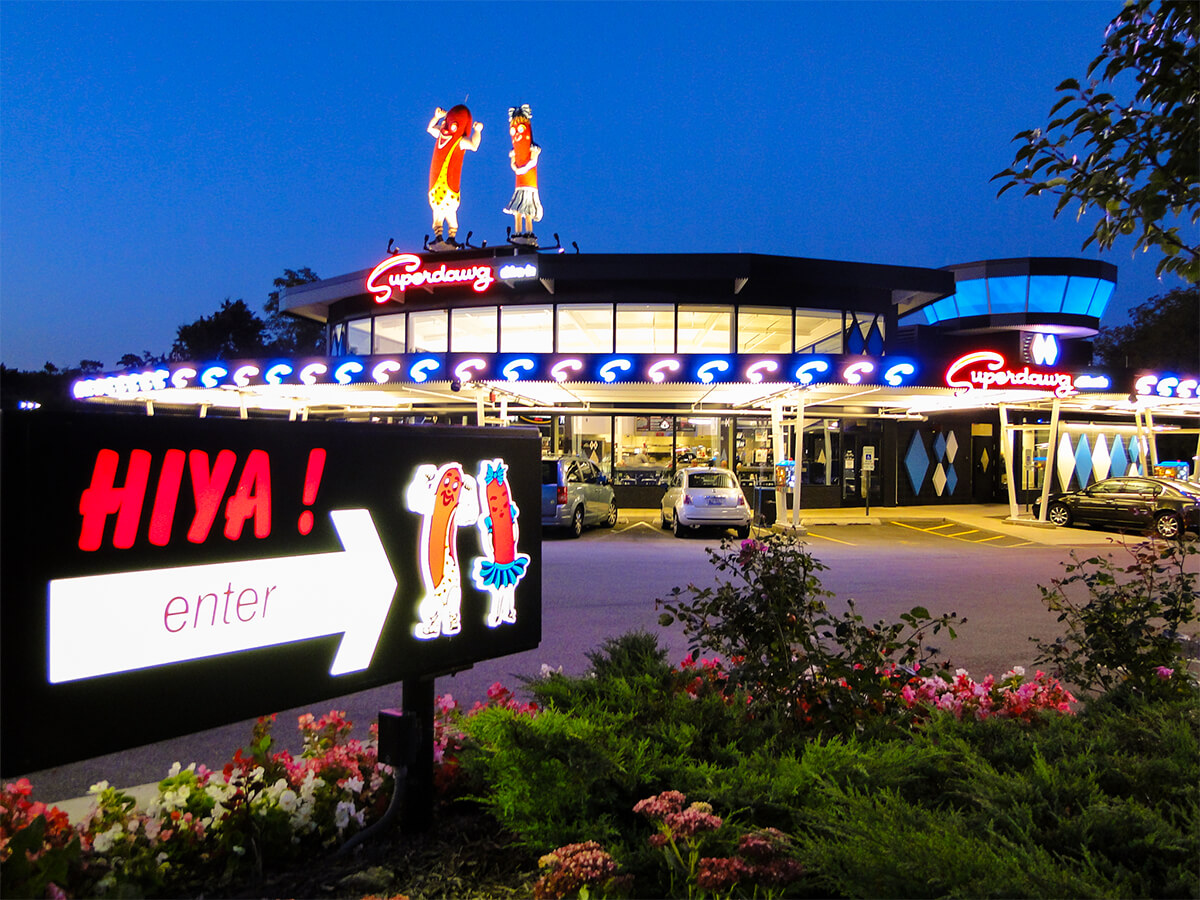 Over the next six months, anticipation grew for a new Superdawg® to open. In January, 2010, Maurie, Flaurie and the rest of the family were proud to say, “HIYA!!…From the bottom of our pure beef hearts, Thanks for stopping®” in Wheeling. 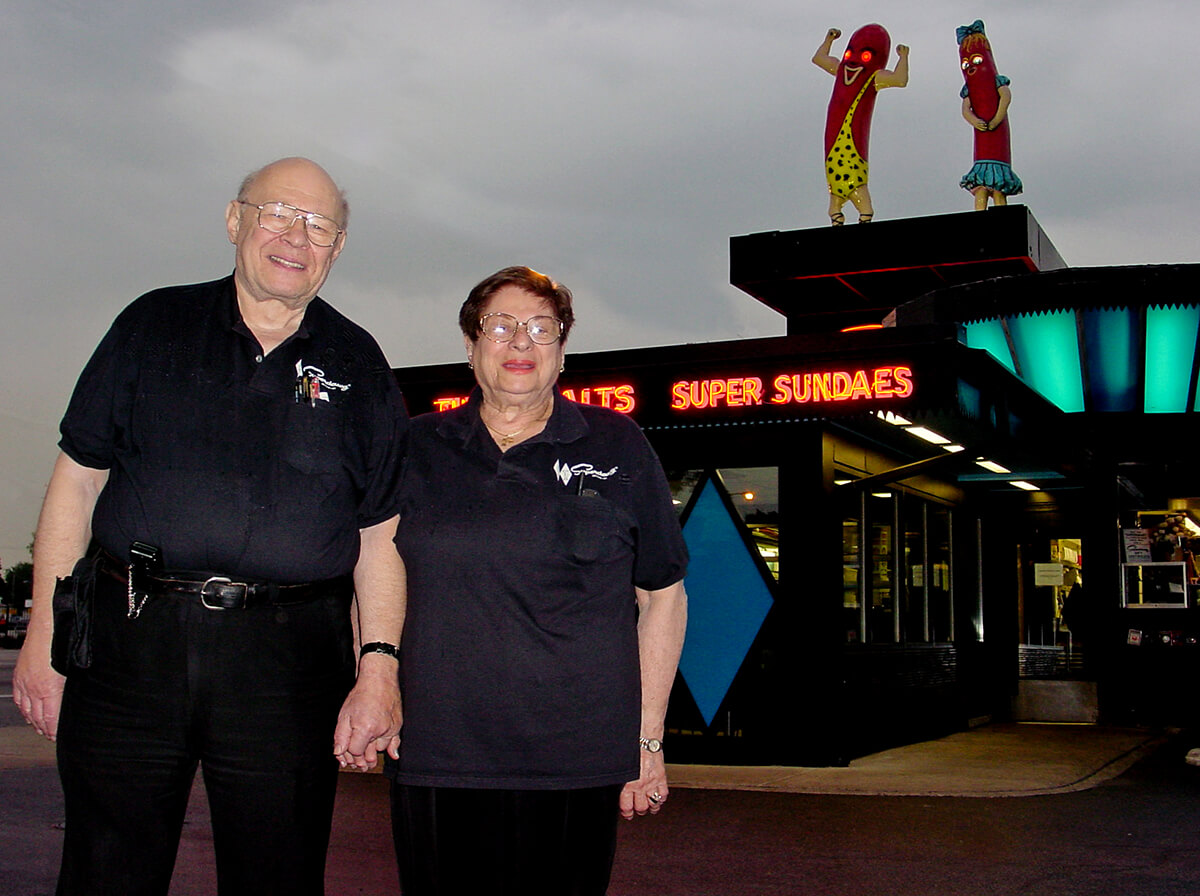 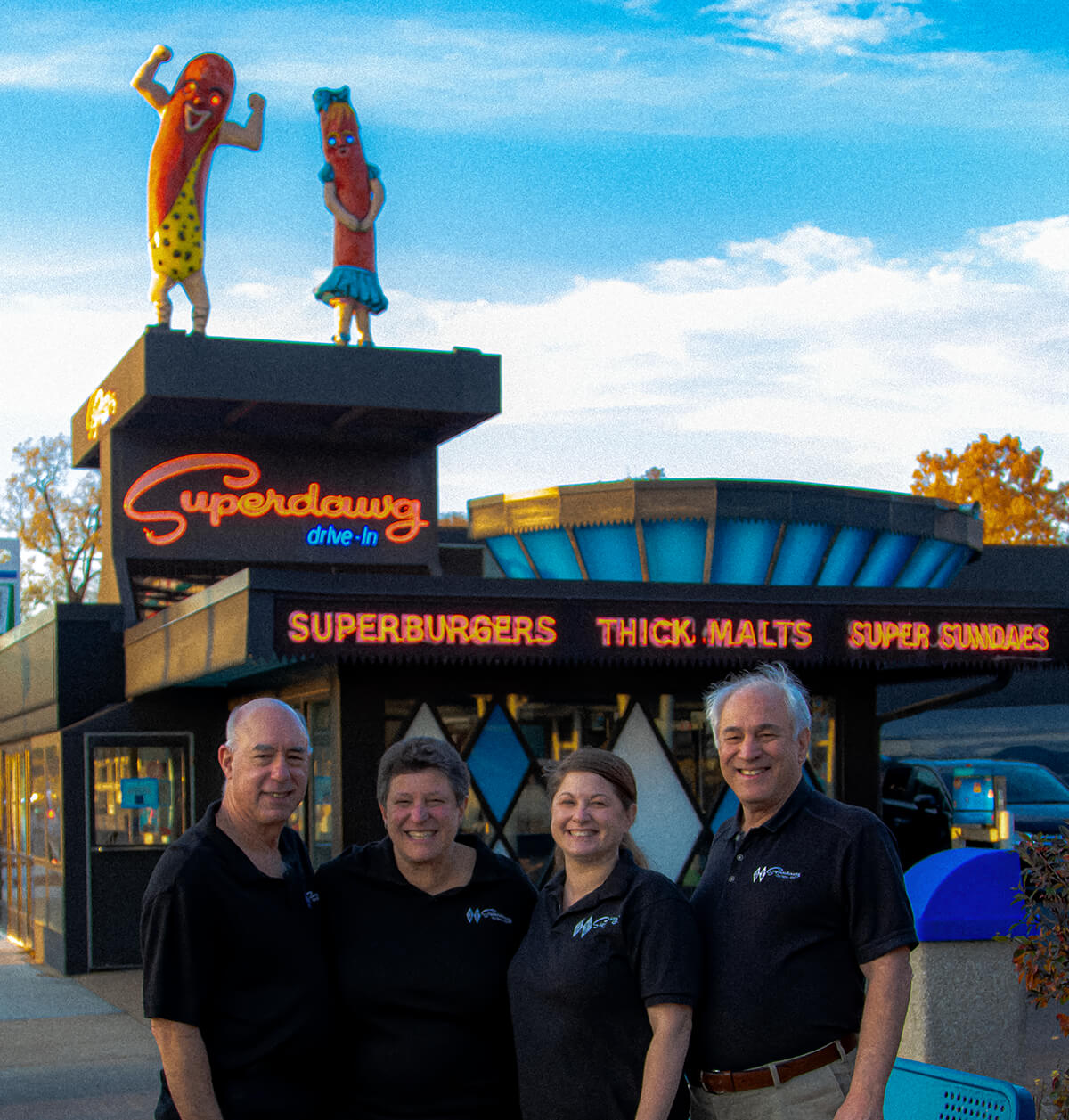 Since 1948, Maurie, Flaurie, their children and grandchildren have scrupulously adhered to one goal: “always to serve you in a manner that will make you want to return – and bring your friends, and new generations, with you.”

From the bottom of our pure beef hearts… THANKS FOR STOPPING®.